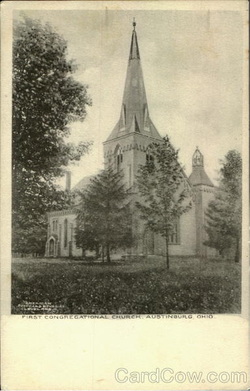 A BRIEF HISTORY OF THE AUSTINBURG
UNITED CHURCH OF CHRIST
On October 24, 1801, The Reverend Joseph Badger organized a congregation at Austinburg, the first in the Western Reserve,  and the second in the State of  Ohio.  The first services were held  in homes and barns until a log structure was made for a meeting house at  Austinburg Center – the crossroads at Rt. 45 and Lampson Road.

In 1815 a frame church was built in front of the present Center Cemetery. In 1841 the congregation began to hold its services in Austinburg Village in the former Methodist Chapel,  now the Austinburg Town Hall. The congregation built a new frame church in 1857 at the northwest corner of Rts. 45 and 307, and this one burned in 1870.  Church services were again held in the “East Church” (Town Hall).  In 1874, L. B. Austin gave land and work was begun on our present church building.  It was dedicated on Sept. 27, 1877, completely paid for.

The church annex was added in 1932, remodeling of the Prayer Room below the choir loft into a Lounge in the 1960’s, and in 1982 the renovation of the basement below the sanctuary was completed, making three Sunday School rooms, restrooms, and the secretary’s office.

In 1993 a complete cleaning and restoration of the brickwork was done on the sanctuary building. In 1995 all of the stained glass windows were replaced.

Our congregation celebrated its Bicentennial in October 2001, and looks  forward to many more years serving the community in the spirit of Christ.